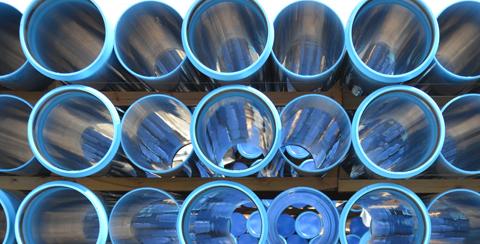 The project for the Renewal of the Water Supply Network and Optimisation of Energy Consumption for the Community of Irrigators in Moncofa, in the province of Castellon is included in the Modernisation Plan for Agricultural Structures in  the Valencian Community and considers the proposals by water users to support a rational use of hydraulic and irrigation resources.

The actions that have been described in the project are located within the area of Moncofa town, in Plana Baja Council, in the province of Castellon.

The plan intend to improve irrigation systems in order to better use hydraulic and energy resources to increase savings and improve the well-being of the people who depend on such irrigation systems. The project includes the modernisation of 750 ha of irrigated land divided into 1.833 fields.

Agriculture has been for decades the main economic resource for the people in the area.  Agriculture facilities cover most of the municipal land, and their main produces are oranges. Land surface has been decreasing for decades due to the use of the land for other purposes, mainly urban construction or industrial facilities and communication structures.

The water for agricultural use at Moncofa comes from wells, which have been traditionally transformed or abandoned when they become saline, when their pumping height was excessive or when their equipment had deteriorated in excess.

The Irrigators’ Cooperative is supplied at present by two wells, Barranc de Betxi within the municipal land of the nearby town Alquerías del Niño Perdido and a second well known as Pedrera, which is located within the municipality of Burriana, with submerged pumps and 678 m3/h flow. Both facilities were built in 1980, when the Cooperative had to move their supply wells outside Moncofa’s municipal land because of the salinisation phenomenon. At that moment, surface irrigation was widely used, which demanded a large water flow per hectare. At present drip irrigation is used in all of the areas except for Bobalar Nou.

The wells in Barranc de Betxi and La Pedrera are interconnected by 2.350 meter long and 600 mm wide asbestos cement pipes.  An 800 mm diameter pipe connects the interconnection pipe and lies along the AP-7 motorway down to the pumping station at 4,120 meters distance. The pumping station includes a 600 m3 underground reservoir and three pumps which sum up to 250 CV power to pump up 20,000 litres/min into the top reservoir.

The water is pumped up through an initial 890 m section of 700 mm diameter asbestos cement pipe that lies parallel to the AP-7 motorway, and then through a 700 millimetre concrete pipe across the AP-7 up to the crossing with the CV2250 road. From that crossing and for 2,653 metres the water is carried through a 700 millimetre concrete pie to the top reservoir.

The last section was built in the period 1979-1980 and presents serious functional problems due to the frequent cracks in the 700 mm diameter concrete and asbestos cement pipes.

2. Purpose of the work

Replacing the whole pipe section from the AP-7 crossing up to the Top Reservoir because of its deficient condition. The new pipe network will ensure the water supply to the Irrigation Cooperative. 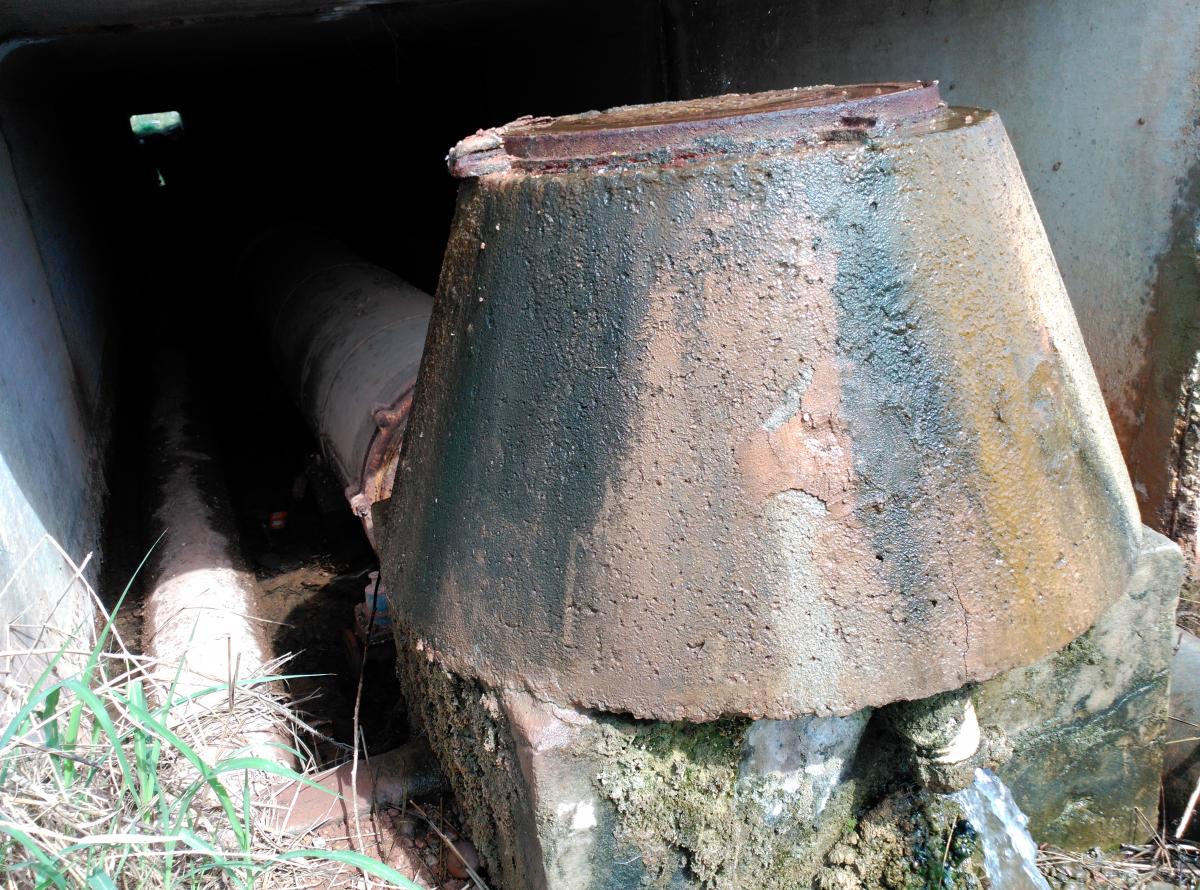 Several alternatives have been considered for the supply pipes layout. The selected layout is the most suitable one since it optimises energy losses by avoiding rising the water up to the Top Reservoir, which would cut the piezoelectric line and would increase energy consumption.

As part of the necessary works, a class 500, 630 mm diameter PVC-O pipe will be installed from the defined bifurcation point to the connection pipe.

The selected solution meets one of the main objectives of the irrigation system renovation, i.e. reducing water leaks along the transport systems while reducing energy requirements.

In order to complete the necessary topographic study and technical drawings for the Renewal of the Water Supply Network and Energy Consumption Optimisation for the Community of Irrigators in Moncofa (Castellon) and to determine the definite layout of the pipe network next to the publicly owned land next to AP-7 motorway, CV2250 road and the river Belcaire, a topographic study of the land affected by the works has been carried out to identify  the particular spots, supply wells, pumping stations and any other services that may have to be charted for the successful description of the project.

According to the new project, 2,653 metres of the current 700 mm asbestos cement and concrete pipes are to be replaced by PN16 DN630 mm PVC-O pipes. 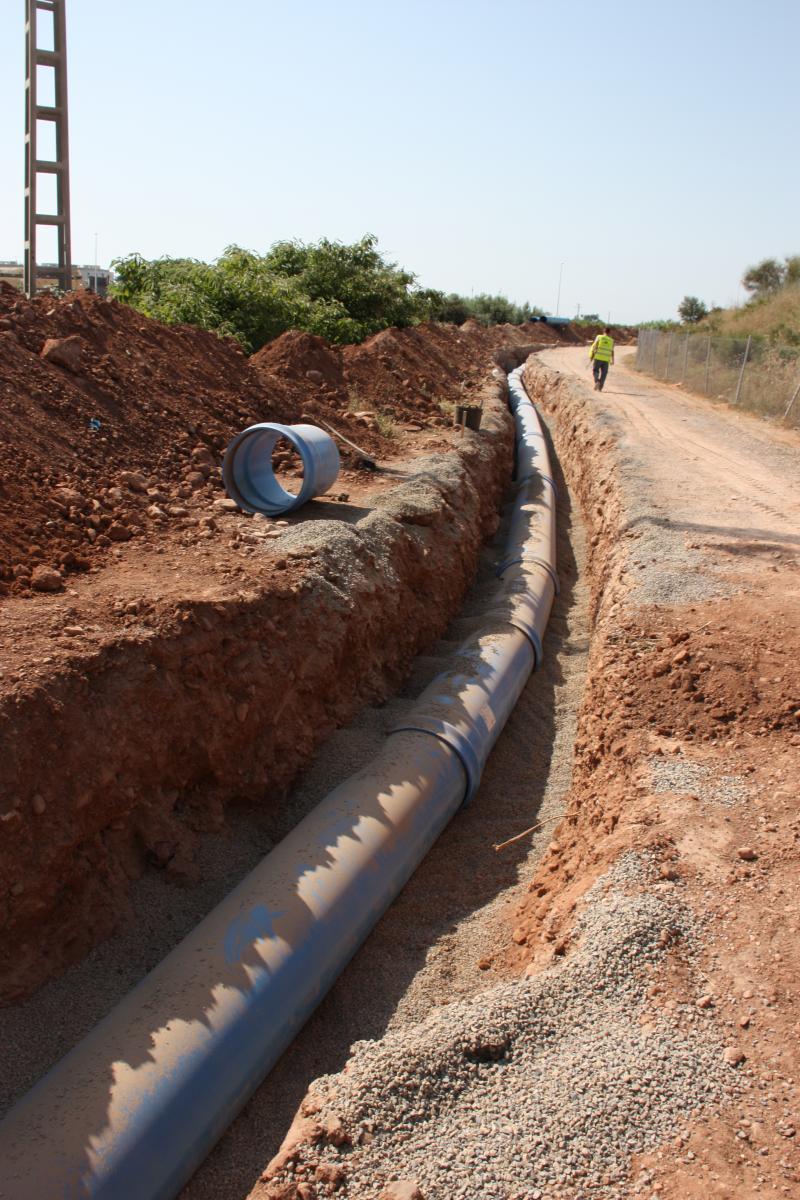 The design and layout of the main line was determined according to the following criteria among others:

Since the project only consisted on the replacement of the water supply network to solve the problems related to cracks and leaks, the Environmental Impact Study did not require any updates. Nevertheless, some measures were taken to reduce or lessen the impact of the works on the environment.

PVC-O TOM® pipes’ exploitation efficiency and their low maintenance costs make of them an excellent alternative for irrigation networks based on their superior mechanical and chemical properties.

Nevertheless, their technical suitability is associated to the compliance with approved installation procedures.  It is essential that the parameters defined for the execution of projects regarding water networks comply with the corresponding regulations and construction criteria with respect to the handling and installation of pipes, so that people and facilities safety is guaranteed at every moment. It is, therefore, a priority, to take into account every project specific requirements and demands, and rigorously carrying out every single step according to such requirements and demands, such as the examination and assessment of the geotechnical studies, digging procedures, ditch backfilling and compaction, anchoring systems, etc. It is also equally important the correct commissioning and scheduled maintenance of all the key elements in the network.

Some of the features that make of PVC-O TOM® pipes the right choice for this project are described below: