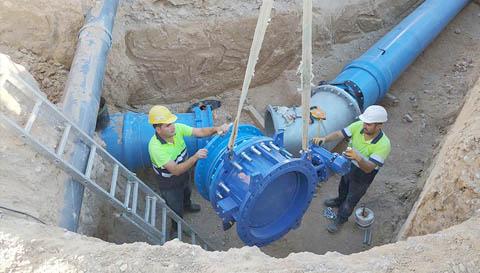 In June 2004, the Governing Board of the Irrigation Community approved the initiation of procedures for the execution of irrigation modernization works in its area, through the construction of several regulating reservoirs and the installation of pressurized water distribution networks, automated at the plot level.

Subsequently, an agreement was reached with the Ministry of Water, Agriculture, Livestock and Fisheries of the Region of Murcia to help finance the works, by carrying out the works corresponding to the modernization of irrigation in Sector 3, of the four sectors into which the irrigable area of the Community is divided, and of the volume regulation system of Sector 2.

The hydraulic network of Sector 2, which is the object of this project, and the total modernization of Sector 1 will be financed through the Order for the Improvement, Modernization and Consolidation of Irrigation in the Region of Murcia. Regarding Sector 4, the regulation reservoir, known by the name of "Dª Vicenta", and the rest of the modernization works and facilities, have already been carried out by the Ministry itself and are currently fully operational.

In the works for the execution of this project, only all the works and installations of a hydraulic nature and energy supply are considered, necessary for the modernization of Sector 2, with a modernizable surface area of 879.5 ha, distributed in an Impulse Zone of 219.3 ha and 371 plots gathered in 41 hydrants and a gravity zone of 660,1789 ha and 868 plots in 98 hydrants, because those necessary for volume regulation are the subject of another project.

The works were promoted at the request of the Water Irrigation Community of the Tajo-Segura de Librilla (Murcia) Transfer. The project was drafted by Water Technologies, leading the Construction Management and Moval Agroingenieria security coordination, and finally executing the same Padelsa Infraestructuras. The works began in 2018 and are scheduled to be completed in 2020.

The shortage of water that the Spanish southeast suffers persistently and the insufficient efficiency of the current irrigation system has determined that the Community of Irrigators has approved the replacement of the network of ditches, by another under pressure, buried, formed by pipes of different materials, diameters and stamps, which is capable of serving in each farm the flow of filtered and measured water, necessary for the proper functioning of the drip irrigation that will be installed in each one of them. 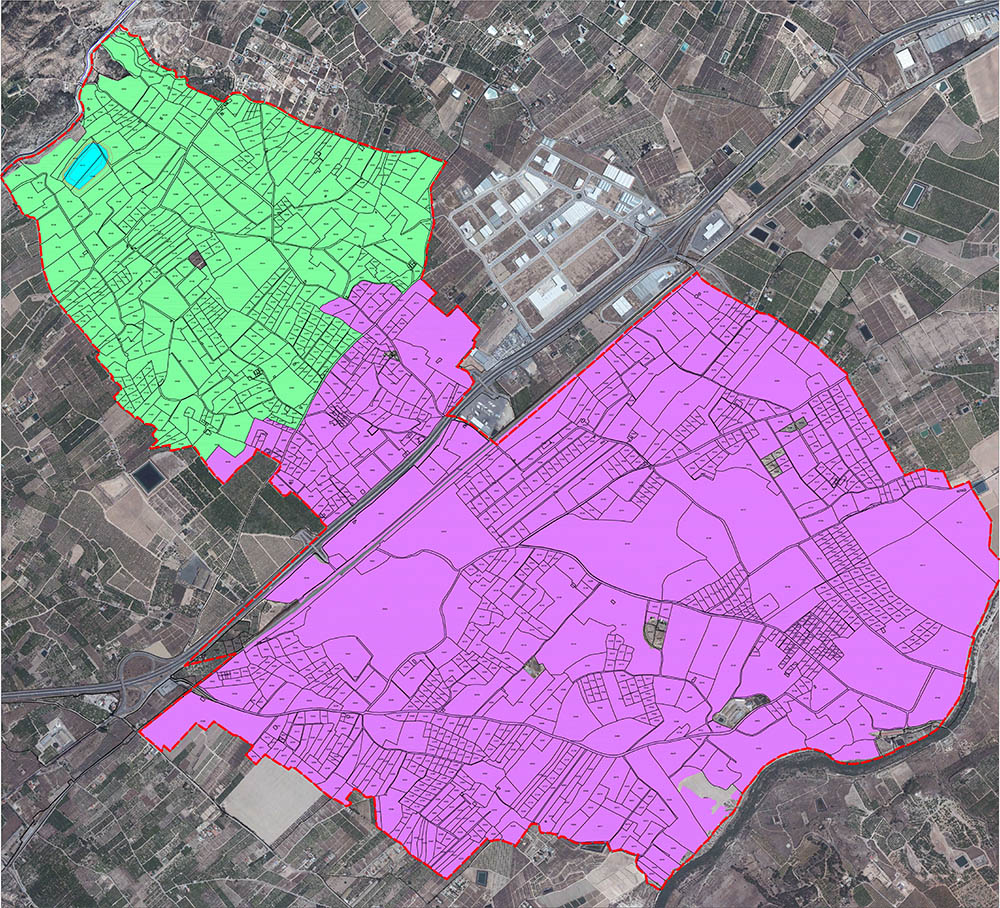 The installation will start in each Sector from a regulation reservoir, which in Sector 2 has been the subject of a separate project carried out and financed by the aforementioned Ministry, which will be supplied from the corresponding automated intakes of the TTS Canal.

Its scope is located entirely in the municipality of Librilla (Murcia).

Irrigation before the execution of the works was by flooding in 45% of the irrigable surface and was organized from five intakes on the TTS Canal. The water poured into channels that, varying in section, constituted a network of ditches that carried the water to each of the plots. The other 55% have high-frequency irrigation systems installed, starting at a private reservoir, where they collected the water corresponding to each irrigation shift.

The purpose of the work is to optimize the use of currently available resources, increase the seasonal regulation capacity, optimize the water and energy supply infrastructures, in order to reduce drive costs, ensure the supply of water on the plot and automate and computerize hydraulic infrastructures, facilitating consumption control and administrative management of water. 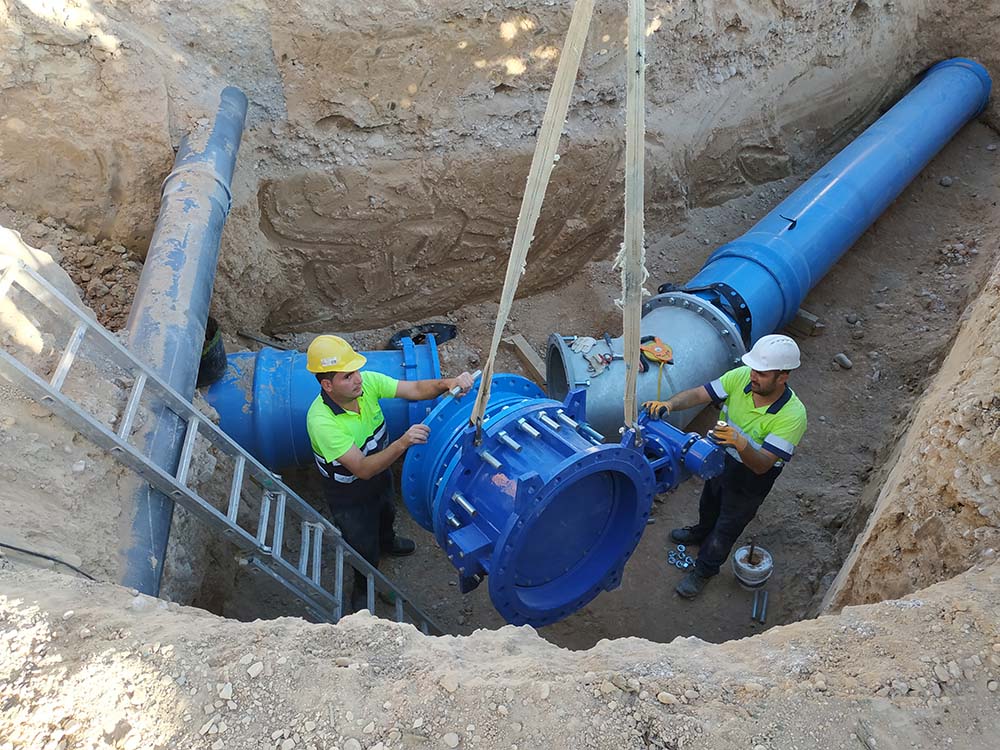 4.- Design of the network and description of the works

For the calculation of water needs, an adult plantation of lemon trees is considered representative of the irrigable area, formed at 60/40 by the Verna and Fino varieties. The probable diameter of the bulb, given the texture of the terrain, has been estimated at 1.37 m, which means a wetted area per emitter of 1.47 m2. With an arrangement of 8 emitters of 4 l/h per tree, considering a planting frame of 5.5x5.5, a percentage of wet soil of 35% is obtained. In this way, an irrigation module of 1,057 l/m2h was deduced and thus it follows that it is convenient to do 3 daily irrigation shifts for each Zone of each Sector, and if the JER is 18 hours, there will be 6 hours per shift.

In total there are 8,802,300 m3/year. This figure is made up of the endowment of the CCRR of the Tajo-Segura Transfer, the runoff collected in the Rambla Dam, those corresponding to the concession of reclaimed wastewater from the Librilla WWTP and groundwater from some wells.

The plots located in a strip of approximately 50 m below the average elevation of each reservoir need the contribution of energy to the irrigation system for its proper functioning. Therefore, the sector has been divided into two zones, one that will work by impulsion and the other by gravity.

For each irrigation sector, there has been a regulating reservoir that will be supplied independently from the Canal through the corresponding intake. In this sector the reservoir is the subject of another project and has been carried out directly by the Ministry of Water, Agriculture, Livestock and Fisheries of the Region of Murcia. 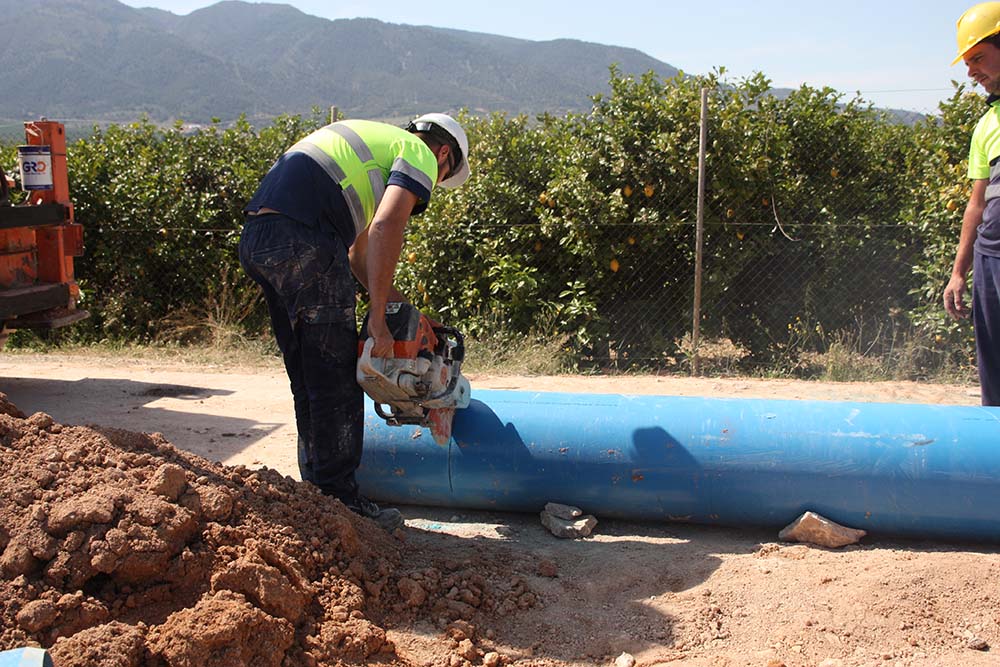 Filtering equipment: Made up of 2 batteries of 24 units each of 3 ”self-cleaning ring filters with a 100-micron pitch, or equivalent system that must maintain a filtering surface of 24.24 m2, all on polypropylene collectors of PN10 and 300 mm in diameter or material of equal or better reliability.

Pumping station building: The pumps and filtering equipment will be housed in a building with a metal structure measuring 25x10 meters on the ground, vertical enclosure using a precast reinforced concrete exposed panel and a metal sandwich-type roof.

Power supply: The grid power supply to the EB will be made with a 312.2 meter medium voltage overhead line, a 400 KVA underground medium voltage input line to the compact outdoor type transformation center (CTIC) of power, and installation in low tension. The supply of photovoltaic solar energy will be made from an isolated ground plant of 594 panels of 300 Wp, with a power of 178.2 kWp, which will be capable of providing 257,570.2 kWh / year annually with a use of 54,7% of the total annual production, on the energy to pay if all of it came from the network. The plant will also have a system to store energy with stationary batteries, with a capacity to deliver 450 kWh/day. 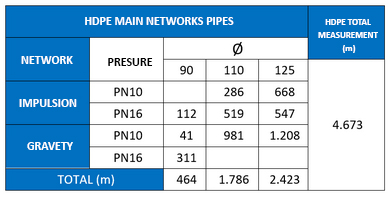 Transfer pipe between the regulation reservoir of the sector of the present project and that of sector 1, 1,924.50 m long, made up of PVC-O pipes with a diameter of 400 mm PN12.5.

Automation: remote units will be used to control hydrants and valves, which will communicate with concentrator units (one in the impulsion zone and the other in the gravity zone) via radio. 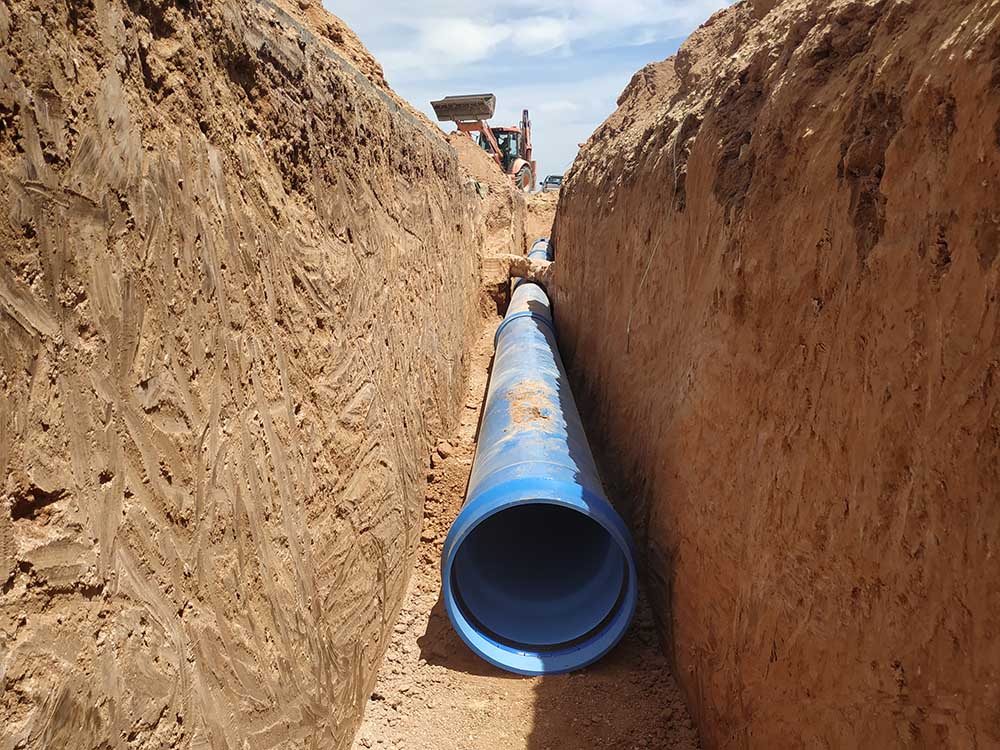