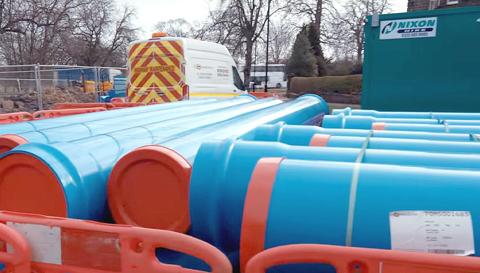 Yorkshire Water developed a project in order to reinforce the Harrogate's water supply infrastructure to continue providing high-quality drinking water to local residents and businesses and also to supply new developments in the town. New Trunk mains needed to cope with the large number of new houses being built in and around Harrogate, to future proof, and maintain supplies and demand to the Harrogate and Knaresborough networks. This work was to allow for extra capacity, greater network resilience in anticipation of the housing developments being planned and would involve laying six miles of new water pipes in the town to provide extra capacity to meet the water needs of the growing number of new developments while improving the resilience of Harrogate’s overall water supply.

This project consisted mainly of the replacement of old pipes by new ones that could keep and maintain a safe, reliable, and clean water supply to all residents making sure that the pipe's reliability and pressure maintained an acceptable level.

According to the project, most of the new pipe would be laid on the highway but some would need to be laid in The Stray so, a plan that reflected different actions to minimize the impact on the park and on traffic as much as possible should be developed. Within this framework, Yorkshire Water and Morrison Utility Services worked closely with Harrogate Borough Council in order to protect the environment during the development of the project and to minimize disruption at every stage of this scheme. 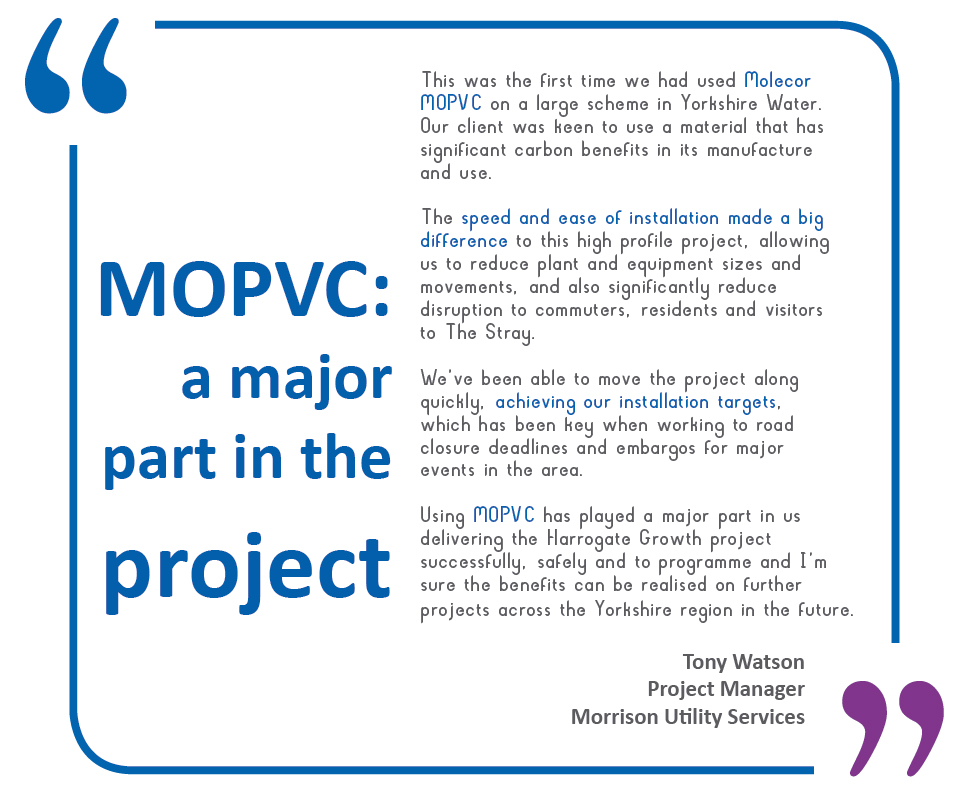 The materials initially considered for the development of this project were HDPE and Ductile Iron. MOPVC pipes were introduced within the options due to the advantages that this kind of pipes imply and finally, this was the selected option due to the reasons explained in the next points. 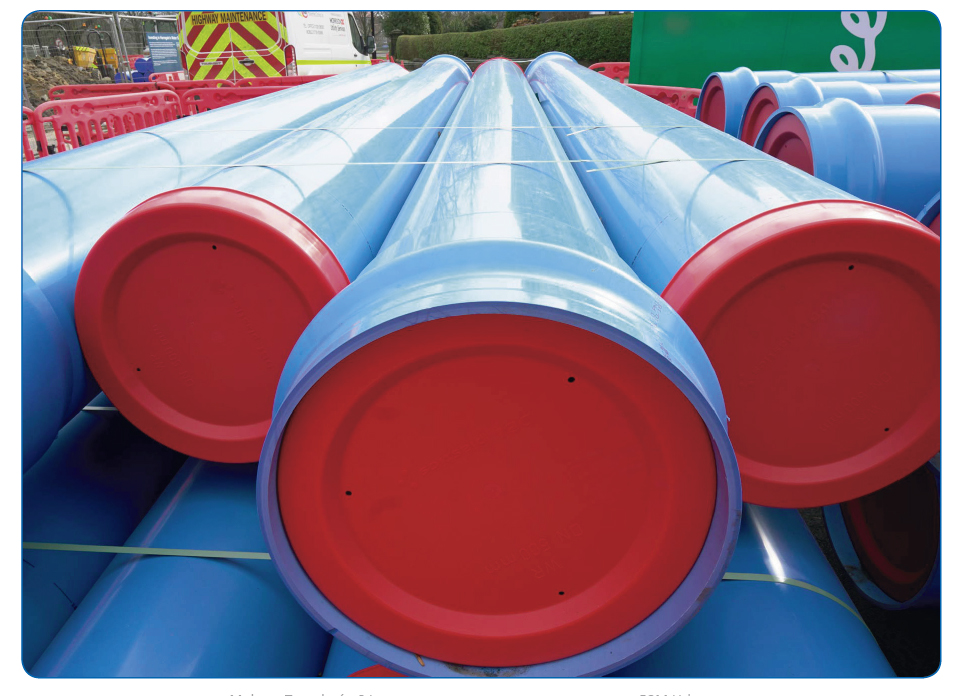 Molecor MOPVC TOM® pipes were chosen as the optimal solution for this project due, among others, to these three advantages:

Within the development of this project it was essential to try to minimise traffic disruption as much as possible whilst the pipe was being laid and to this fact, the lightness, ease of connection, and ductility of the TOM® pipes were fundamental to reduce installation times.

Besides this, the almost indestructible TOM® pipes make their manipulation can be performed with higher discharge and placement performance rates. TOM® pipes are lighter and can be handled easier than pipes made of other materials: they weigh less than the half of PVC and PE pipes, and between six and twelve times less per linear meter than cast iron pipes of an equivalent nominal outside diameter.

If we bear in mind ductile iron, a material initially considered, we find that due to their lower weight, MOPVC pipes are much lighter and easier to handle in fact, the handling and connection of the pipes can be manually done up to DN250 mm. For larger diameters, although they need a mechanical device to facilitate the movement, it is not required to have a crane with a high tonnage capacity, as would happen in the case of ductile iron pipes.

Following with the comparison with ductile iron, MOPVC pipe is chemically inert to all components found in nature, so there is nothing to worry about in both the ground conditions, where the pipe will be laid or the nature of the water to be transported.

MOPVC is a homogeneous material chemically resistant to corrosion, so it does not require the added protection required by ductile iron pipes nor using additional coatings or cathodic protection. Unlike ductile iron pipes, MOPVC pipes will not need to choose special coatings based on the terrain where it will be installed. It has no external or internal coatings that may wear or scratch leaving a weak point for corrosion that can alter the quality of the water flowing through it.

If we compare the installation and operation of MOPVC pipes with HDPE ones, material initially considered, we reach these points:

Besides these features TOM® MOPVC piping systems have between 15% and a 40% more hydraulic capacity than systems with pipes made from other materials and with the same external diameter. This is because Molecular Orientation provides TOM® pipes with a greater internal diameter and flow section. Additionally, the internal surface is extremely smooth, reducing load loss and making it more difficult for deposits to form on the inner walls. Subsequently, TOM® pipes carry more water using less energy than other kinds of pipes. What’s more, they are the most efficient in terms of the relationship between investment and available hydraulic capacity

4. - Size and Length of scheme 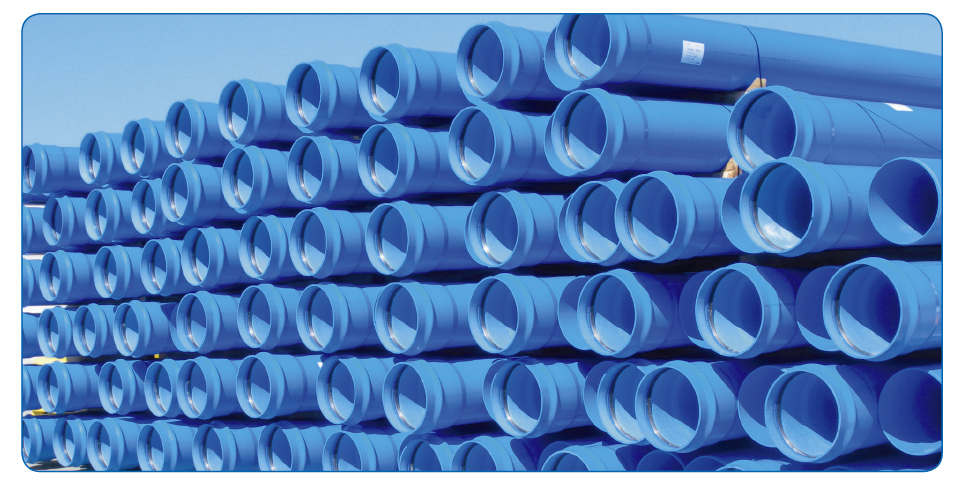 The project to implement and reinforce the water supply infrastructure of Harrogate, carried out by Yorkshire Water and Morrison Utility Services, with MOPVC pipes manufactured by Molecor and provided by R2M Ltd. presents an approximate value of £3.6 Million.

With this project, as it has been mentioned at the beginning of this case study, high quality drinking water will be provided to local residents and businesses and will also greatly contribute to supply the new developments in the town. 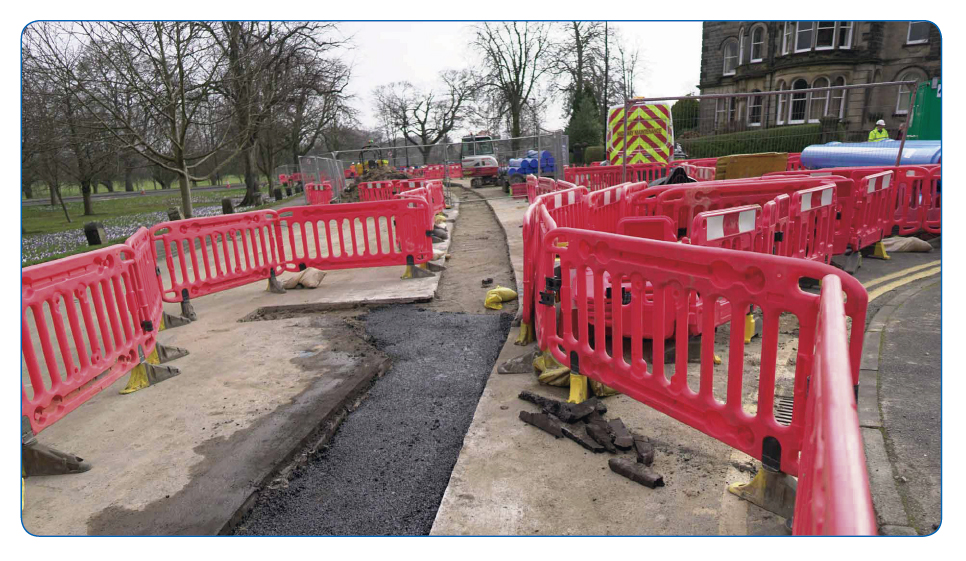 6. - Scope and challenges of the project

The scope and challenges that presented this project were highly significant; all issues needed to be perfectly coordinated in order to minimise the impact on the trafic in an area as busy as the Prince of Wales roundabout, The Stray protected park land and the residential streets in Harrogate
and Starbeck. The works were planned as follows:

These points implied important challenges for the proper development of the project such as:

Bearing all these facts in mind it was essential to work with experts to ensure the correct development of the project.

With The Stray being such an intrinsic and unique part of Harrogate, Yorkshire Water worked with a specialist arboriculturist and the Council’s Parks and Environmental Services, to ensure trees and grassed areas are protected throughout the work.

“We’ve worked extensively with North Yorkshire County Council’s Highways Department and Harrogate Borough Council regarding every aspect of this essential scheme to try and minimise traffic disruption as much as possible whilst the pipe is being laid in The Stray.
We’ll be doing everything possible to keep disruption to a minimum and complete the work as quickly as we can.”

Specialist track matting was laid to protect the grass from equipment; where ground had to be dug up to lay pipes it would be filled back in as quickly as possible; and work will take place as far away from the tree canopies and root spread as possible to avoid unnecessarily damaging any of the trees.

Yorkshire Water and Morrison Utility Services, worked closely with Harrogate Borough Council in order to protect the environment durinig the development of the project and to minimise disruption at every stage of this scheme.

To deal with these challenges it was essential to work with a product of the highest quality that could easily fit in small places to be installed in the narrow streets of Harrogate and that would be as sustainable and eco-friendly as possible in order to be installed in The Stray. Molecor MOPVC pipes brought together all these features:

Besides the ease of making a pipe connection, it was also fundamental the capability of the pipes to adapt to the layout of the land due to their ductility, something that directly impacted on their higher installation performance thus reducing the impact on traffic, on the daily lives of residents
and on the recovery of The Stray.

Bringing together the light weight of the pipes, their ease of connection, their adaptability to the lay out of the project and their extremely high installation performance, which led to rapid progress on site, the completion of works was done within the programmed deadlines.

Besides this, one of the pillars that guides the activity of Molecor is its commitment to the environment, on the basis of which the company has developed highly sustainable and environmentally friendly manufacturing system for the TOM® MOPVC pipes which is based on the following principles: 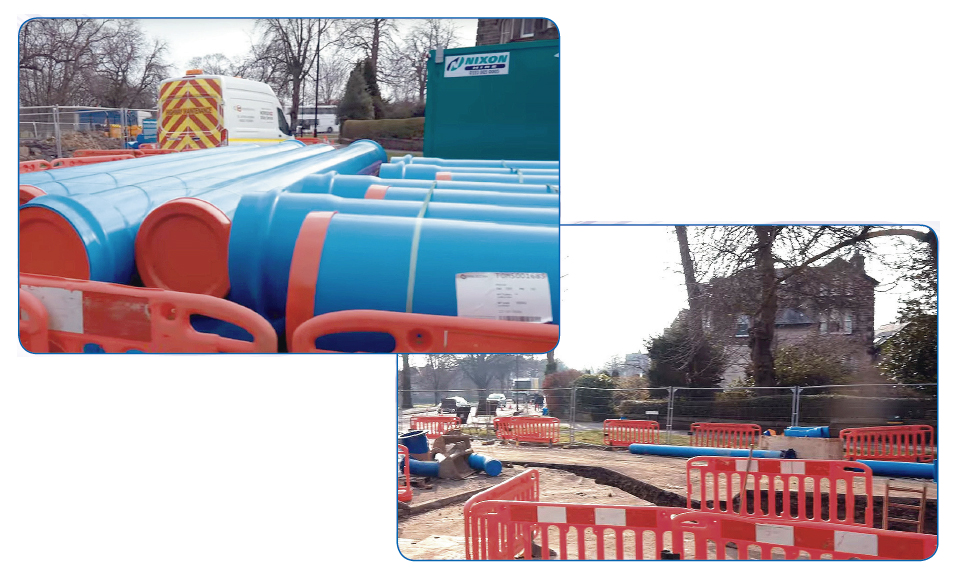 The speed and ease of intallation of these pipes implied a huge difference for the proper development of the project and allowed to reduce plant and equipment sizes and movements as well as the disruption to residents and the impact on traffic, achieving at the same time, the installation targets. TOM® MOPVC pipes manufactured by Molecor have been an essential key for the quick and efficient implementation of the project. Their extreme lightweight, ease of connecting and their adaptability to the layout of the project have provided very high installation performance rates.

The project, with an approximate length of 4,650 m, and a value of around £3.6 Million, will allow extra capacity, greater water resilience facing the new housing developments planned and TOM® MOPVC pipes will ensure that the quality of water flowing through them remains unchanged over time since there is no material corrosion leading to migration into the water from the pipe.

The whole project, including the installation around the sensitive Prince of Whales roundabout, the installation along the protected park land of The Stray and the installation through residential street in Harrogate has been developped following the planification; something to which the characteristics and advantages the TOM® MOPVC pipes have definitely contributed. 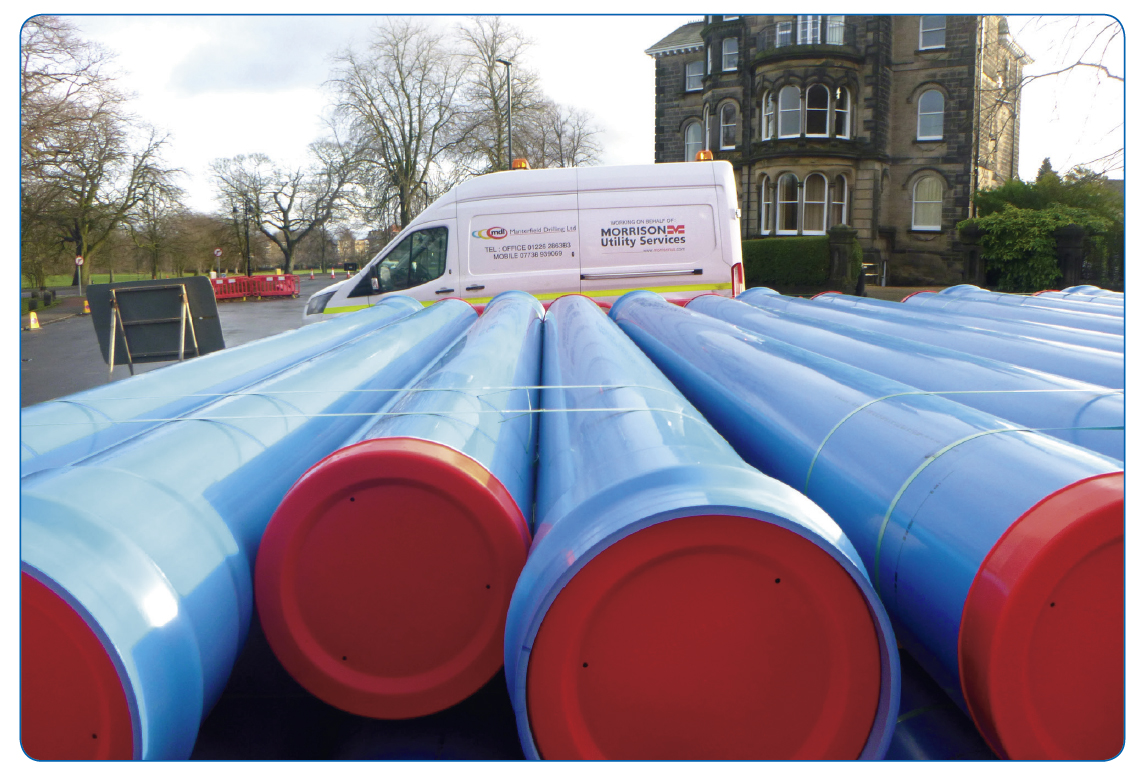